So you’ve decided you want to be a CEO. As you’re planning for business school and consequently investigating the GMAT, you’re likely to come across the term “computer adaptive”. What does that really mean? And why is it so important to understand the GMAT as a computer adaptive test (CAT) when you’re deciding between the GMAT and the GRE?

The GMAT adaptive test is unlike any of the other major standardized tests you’ve taken in your lifetime. Other tests calculate your raw score based on your number of correct answers, make a deduction for each incorrect answer (in some cases), and then translate that raw score into a curved or “scaled” score. Though the broad strokes of GMAT scoring are similar to this standard M.O., the GMAT is much more than just a computerized version of a paper-based exam: it adapts to your performance as you progress through the test questions. For a clearer picture of what that means, let’s consider an example.

The GMAT adaptive algorithm applies to the two main components of the test, Verbal and Quantitative, but not to the Integrated Reasoning section or the essay. It’s a central component of the test’s scoring, so how exactly does it work?

Imagine that you’re on a first date with a computer that wants to get to know you better (you laugh, but just wait a few years—we’ll be there sooner than you think). The computer assumes that you’re of “average” interest and begins each Quant and Verbal section with a medium-level question. As you answer questions correctly, the computer warms up to you and offers questions of increasing difficulty. It “likes” you more and increases its estimate of your abilities.

On the other hand, as you answer questions incorrectly, the computer becomes less impressed and offers questions that are easier and easier. Your electronic paramour diminishes its estimate of your ability, and while it may still give you opportunities to redeem yourself, it becomes increasingly difficult for you to do so as you move closer to completion of the section.

In other words, the GMAT adaptive test makes the most sweeping decisions about who you are early in the section and formulates its opinion of you based on first impressions. As you move through the section, it gets more and more difficult to change this opinion even if you have a spurt of witty banter (correct answers) at the end of the date. Because of this, the overall GMAT scoring is based not just on the number of questions answered correctly but on the difficulty level of those questions as well.

The fact that the GMAT is a computer adaptive test directly affects your GMAT online test preparation planning. Here are the major considerations that should factor into your test-day strategy and therefore into your GMAT prep plans as well.

1. On the GMAT, you cannot move on to the next question until you answer the previous one, and once you’ve moved on, there’s no going back! You can only see one question at a time, and this will factor into your time management and guessing strategy for the section as a whole.

2. Time is of the essence, and you must be disciplined when pacing yourself during each section. Average time per question on the GMAT adaptive test for the Quantitative section is exactly 2 minutes, and for Verbal it’s slightly less. You cannot get stuck on a difficult problem midway through the section and end up sinking 4-5 minutes into that one question. Guess and move on, especially if you have no idea how to solve a problem.

3. Finish the section! There are major penalties incorporated into your score on the GMAT adaptive test if you do not finish the section. Consequently, if you suspect that you may not have enough time to complete the section, begin to judiciously guess on a few questions in order to make up time. The computer adaptive algorithm will penalize you if it sees you spent only a few seconds on each of the last several questions, so it’s better to spread your guesses out if possible.

4. Take note of your time throughout the section, not just as you near the end. Your elapsed time will be posted on the computer screen. To pace yourself, multiply the number of the question you’re currently working on by two. That will give you a guideline for roughly how far into the section you should be in terms of time.

How does the adaptive nature of the GMAT affect your prep?

More than most other standardized tests, there are certain aspects of taking the GMAT that are impossible to replicate through homework alone. Practice with the test-taking experience is particularly important in GMAT programs, as students need to become comfortable with the question-adaptive computer interface.

Toward this end, set up a schedule of periodic mock tests during your prep; this will give you progress benchmarks while also providing the opportunity to practice the techniques you’ve learned in the context of a full test and familiarizing you with the experience of taking the full test straight through. At mba.com, you can find official practice tests released by the GMAC, which use the same software as the real test. The practice version of the software scores the test in the same way the actual GMAT is scored but still allows you to review each question individually, which will help you fine-tune your subsequent preparation.

If you want help studying or just want to discuss the test prep process and the optimal prep plan for you, we know some people who can help. Inspirica Pros has dozens of expert GMAT tutors with decades of combined experience; give us a call today. We can’t wait to get started.

An Overview of the GRE and GRE Prep 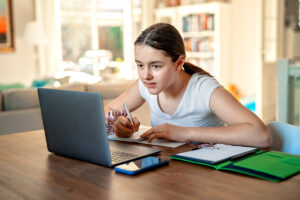